The Skill Of Reflection

The first video gives a theoretical overview of the skills of reflection. The 4 videos below then show examples of reflection taken from a counselling session.

This content is taken from the Counselling Skill Mastery training 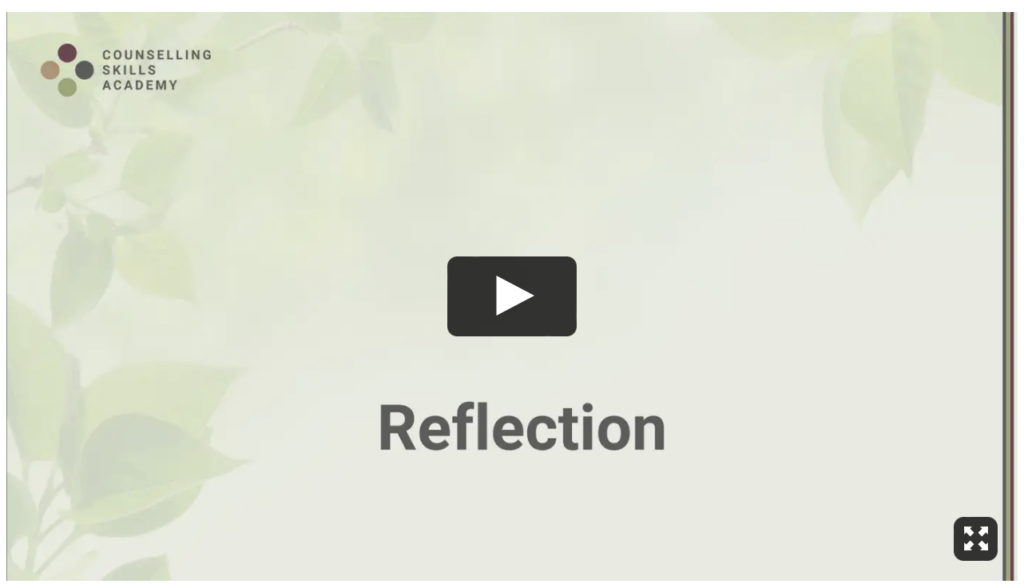 Reflection Examples from a Session 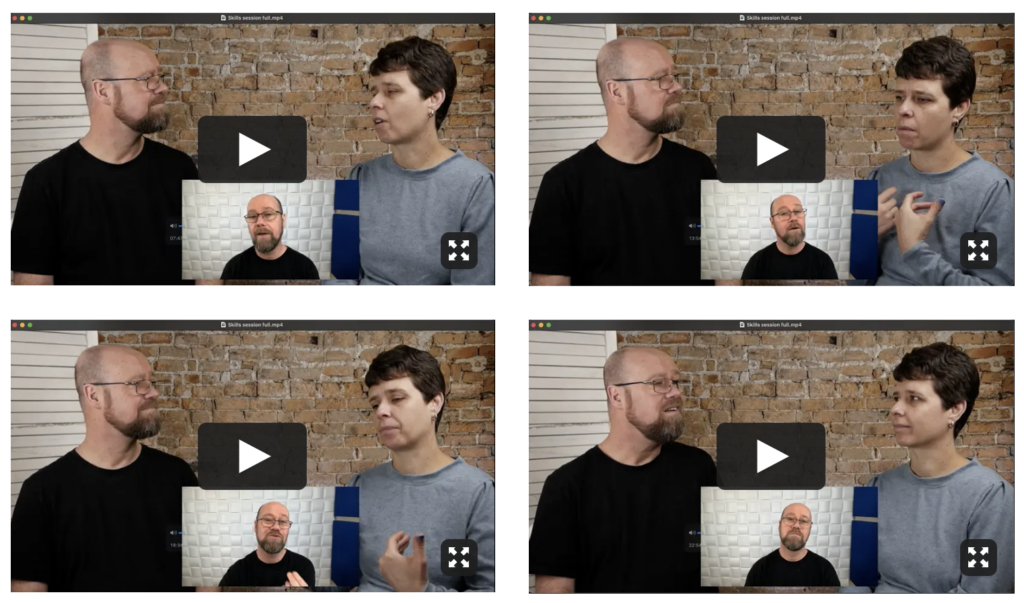 Reflection is like holding up a mirror: repeating the client’s words back to them exactly as they said them. You might reflect back the whole sentence, or you might select a few words – or even one single word – from what the client has brought.

I often refer to reflection as ‘the lost skill’ because when I watch learners doing simulated skill sessions, or listen to their recordings from placement (where clients have consented to this), I seldom see it being used. This is a pity, as reflection can be very powerful.

So why do we use reflection? Is it an effective skill? What does it do within the therapeutic relationship?

Enabling the Client to Feel Heard

First – and really importantly – the client feels heard. And we are reflecting back only their agenda; we are not putting our agenda in there at all. That is true unconditional positive regard. Respecting that the client will set the pace of their journey and ensuring they feel heard builds rapport, which in turn deepens trust within the therapeutic relationship.

Interestingly, the client may hear the words as if for the very first time. When the client has a narrative going around in their head, it’s almost going in a circular motion. But as soon as they share this with you in a session, it changes direction: it is now out, so it is linear. And when you take that and reflect it back – almost like hitting back a tennis ball – the client’s own words can sometimes be quite surprising to them. This allows the client to process and sometimes even clarify their words.

Reflection can also be used to focus down – that is, almost to ‘cut through’ the narrative and to drill right down to the feelings. You may well have seen this in your practice, placement or simulated skill sessions. When a client brings heavy, painful material, it is often really difficult for them to go down to the feelings. So they tell the story and, every now and again, they’ll dip down and touch on those feelings. As they feel that pain, they may quickly run away from those feelings back into the relative safety of the narrative. We can reflect back the feelings words – just those few words that the client said that touched on the feeling.

For example, a client might say: ‘You know, I’m trying as hard as I can, but it’s really killing me. But I go in to work and I try to be strong, and I just carry on.’ And we can reflect back and say: ‘It’s really killing me.’ This invites the client to go back and look at that, because that is the feeling. That is the ‘meat’ of what they are bringing; the rest is the narrative that is wrapped around that. And if you reflect feelings in a relationship where rapport is built and the empathy levels are deep, the client may accept that invitation, go back and say: ‘Yes, it is. I just feel that I can’t go on anymore. I’m so devastated; I feel so much pain.’ And they are there then – out of the narrative and fully in the emotions of what it is that they are bringing.

We can also use reflection to clarify our understanding, instead of a question. For example, suppose the client says: ‘My husband and my father are fighting. I’m really angry with him.’ For me to be in the client’s frame of reference, I need to know whether ‘him’ refers to the husband or the father. So I might reflect back the word ‘him’, with a quizzical look. The client might then respond: ‘Yeah, my dad. He really gets to me when he is non-accepting.’ So you can get clarification in this way, so you can adjust where you are to make sure that the empathic bond is strong and that you are truly within that client’s frame of reference.

Let’s look now at a simulated skill session where reflection is used:

Client:             And as I sort of reflect and look over that kind of situation, so often I would sacrifice my own wants and my own desires. If there was nobody else involved in the situation, what I would choose to do would be very different from what I actually end up doing.

Counsellor:    Sacrifice my own wants?

Client:             [Moment of silence] Yeah. It really feels like putting aside what I would do out of my own free choice and favouring what would be the accepted thing or – in my perception – what I think someone else would rather I do.

Here, the counsellor reflects the feeling that seems to underlie what the client is bringing. It is interesting that the reflection causes a moment of silence for the client, who is mindfully looking at that. In this session, the narrative continued in a very feeling way, where the client took that invitation and decided to go and explore the feelings more deeply. Later in the same session, there’s another use of reflection:

Client:             The thought of doing or maybe expressing my wants and what I would like to do that feels very selfish … for some reason, it feels like: but why put my own wants and needs in front of what someone else might choose?

Counsellor:    Why put my own wants and needs in front of what somebody else might choose?

Here, the reflection was a question that came up in the narrative that the client was bringing: ‘Why put my own wants and needs in front of what somebody else might choose?’ In hearing that back, it’s like the client is hearing that for the first time, differently. And that is evident by the pause that is there, while the client reflects – as a result of the counsellor’s reflection. And the client then answers that for herself; there has been a small moment of movement, which can be heard in the answering of that question.

Next Steps in Reflection

Try using the skill of reflection in your simulated skill sessions within your learning environment. If possible, contract with the person you’re working with to record your sessions (you don’t need special technology – your smartphone will do), listen back, and hear the power of reflection.

Carl Rogers was recording sessions really early on, when recording equipment was relatively new. He reflected that his greatest learning came from these recordings.

Let’s try together to make reflection not the lost skill that is seldom heard, but a powerful skill that enables our clients to move on, to process, and to become more fully functioning people!